Automobile Insurance and The Hidden Price of RightTrack(ing you) 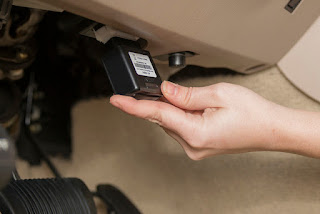 Nowadays, insurance companies are using several strategies to charge for premiums in more oppressive ways because they think they're losing money in the process. One of those methods is "usage based insurance" which consists in pushing customers to try their "discount" plan of plugging a device called RightTrack into their OBD-II port of their car monitoring the behavior of your driving, thus giving you discount based on how you drive and now by your age, gender or credit history. They promise the sun and moon and they paint the scenario that you're missing out if you don't try it. Upon receiving the device, customers should keep it plugged in to monitor their "safe" (unsafe) driving and after 90 days, they should return the device by pre-paid mail and receive a discount up to 30%.

But believe it or not, Usage Based Insurance (UBI) is not a new animal but instead it has about 10 years old. It started with Progressive Insurance Co with the help of GMAC (General Motors Assurance Co.) and they used GPS combined with cellular technology to track not only where you went, how much you drove and how fast. With time, they became the leaders who pushed other companies to do the same thus calling these services (PAYD) Pay-As-You-Drive, (PHYD) Pay-How-You-Drive and PAYG (Pay-As-You-Go).

I had a discussion with my insurance company and even though they told me that the plan was "optional" it was better for me to opt-in since it could save me as low as 5% of my insurance bill if I was considered a terrible driver. So if the benefit is too great to believe, what's the catch? She also told me that the device "doesn't track you", however I should not be concerned about privacy and that "everyone's using it" so I should try it as well.  Now, my question is: if it's that great, why not making it mandatory? For now, this is optional but it's a catchy one because if you chose not to, you're not getting discount.

Another benefit of using UBI devices is that it will single you out if you're one of those exempt teenagers who really drive safely. It also obtains a more precise reading versus having to rely on previous history of accidents. But always remember they give you up to a 30% discount, perhaps not a whole lot to save.


What they DON'T Tell You

As we all know, insurance companies don't offer this "discount" because they're nice to you or because you have been driving safe, but because they want to rise their premiums by tracking and reporting every sensor such as the breaking system, accelerometer, odometer, whether it's dark outside or not, how sharp your turns are as well as how hard you hit that break pedal and how often (even when someone cuts you off). The part they don't tell you is that even though this product/service is "free" (as of free beer), it's not free from Big Data companies to gather as much information (metadata) about you and how you drive (driving habits). This can and will be used not only to predict when you'll have a car crash but also whether to insure you further or not and how much they can charge you in a matter of time. This also helps your insurance company to estimate and charge you over time more expensive premiums if you drive longer distances (faster speed) vs short distances (slower speed). So for example, if you drive to visit your parents every weekend and they're far from you, they will find that pattern over time and rise your premiums because nobody drives slow in long distances.

Let's consider the "no tracking" statement is true for my insurance company because it's totally irrelevant to how they can charge me, they still can track the metadata. Let's consider it as metadata on your phone call as an example; which is the duration of the call (drive), speed, time and how often by applying mathematical formulas to determine how much to charge you overtime. Even though my insurance company claimed they do not track their customers, this does not apply to all companies. Let's consider some of these devices have telemetry via GPS and/or mobile signal locators. How safe would you be if someone does not use a good ethical procedure and checks what you do just because the possibility is there or for sadistic fun? Now, let's pretend we live in a perfect world and nobody spies on nobody or because nobody cares whether you go or whether you visit your family or cheating on your spouse, this doesn't mean insurance companies, will use metadata information to hurt you when they present you with your irrefutable driving habits.

For now, this program is optional even though they are now trying to bundle it with theft recovery and road assistance plans. It will be up to the people if they demand it or not whether they will make it mandatory. It is up to you to outweigh the risks of having your actions judged by a computer screen in which you can't escape or doing it the old-school way and pay a few dollars more each month for exchange of good privacy.

Usage Based Insurance and Telematics:
http://www.naic.org/cipr_topics/topic_usage_based_insurance.htm

Lower Your Car Insurance Bill, at the Price of Some Privacy:
https://www.nytimes.com/2014/08/16/your-money/auto-insurance/tracking-gadgets-could-lower-your-car-insurance-at-the-price-of-some-privacy.html?_r=0

Posted by UnsecurityNow at 11:15 PM

Your thoughts are a goldmine which flourishes within our ever-changing society. Please, post your ideas, constructive feedbacks and clarifications here: