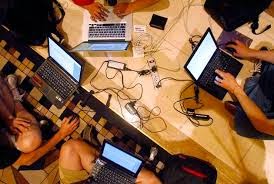 It is always fun, full of knowledge and at the same a little controversial to attend Hacking conferences nowadays. It even had a lot of controversy in the past decades and this has to change.  The full "Hacker" culture atmosphere does not only had big negative connotations in the past but also now but after a talk at B-Sides Chicago, it got me thinking and maybe the speaker is right:  The Hacker's culture might be dead. Some people argue that it is not dead but instead it is more closed because the gurus are having their own groups where the "noobies" are just enjoying their technical and orgasmic talks.

However, that does not represent that Hacker conferences are dead. At my first experience going to two of them lasting 3 days (in total), it got me thinking a lot.  Hacker's conference is not only about talks and about what you can have out of them, but it is mostly about connecting with people so they can all collaborate with each other in the future. Most people would think a Hacker's conference is a place where a lot of "spoiled" and "rebelled" people go to hack and break rules while getting drunk, but that is only a Hollywood and mass media mis-representation of it. I would not only suggest technical and IT, but also regular people to go to one of these events (some are free) and see it for themselves. Some of these talks are not really technical but conceptual and shows how much secure our mindset should be regardless of how much you use computers. It is about learning what the reality is and how can we face it today. How we face it and do to protect ourselves will make us more aware and thus more secure; because after all, we cannot hide the sun with our hands, but we should act on it.

It is a great idea to have the badges from the Hacker's conferences. For instance, for DefCon and Thotcon you are given your registration badge as a little Arduino circuit board in which you are able to connect it to your computer and program the lights on it so they go in sequence, change light colors and even enigmas hidden into the code which can be broken in order to win lifetime pass for those events. Some Hackers spend the whole conference (2-5 days) trying to break the enigma. 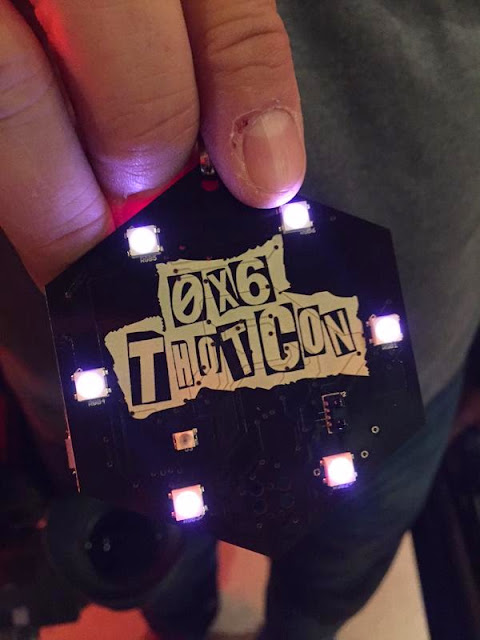 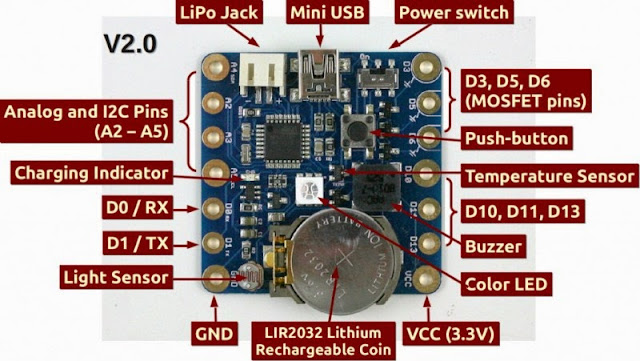 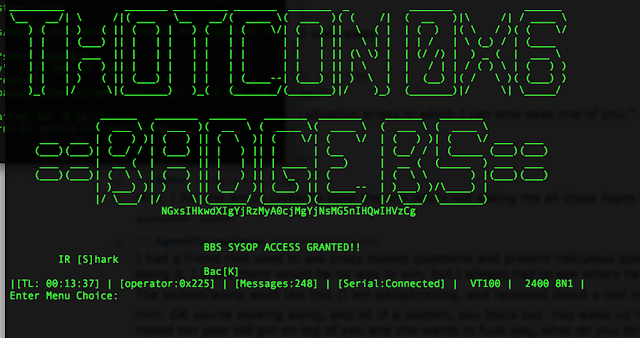 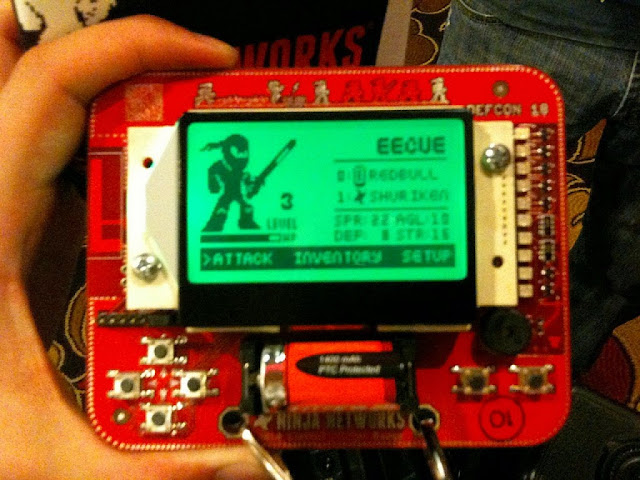 This year was my first time going to these conferences and I had some fun. First of all, I went to an event in Chicago named THOTCON which was split into 2 days (not full days) and I only went for a bit. The talks were not as detailed and motivating as I expected but maybe I was expecting too much out of it. The people were really cool and I got to make some friends with the same ideas and passions than me.

B-Sides Chicago was good in the sense that it was fun to listen up to date material as well as how to be more aware of it and how to protect yourself. I perhaps did not learn a lot from it but I had good connections from important people working in some projects I strongly support.  Something I will have to disagree on was the  heavily use of alcohol in these events because it kills the chance of meeting a lot of people sober and interact with them, in things such as showing your open-source project to someone else or offer yourself as a volunteer on their projects.  Jugging as much alcohol as possible can  prevent you from interacting with people, not in the sense of talking to them but also to share information or showing them your ideas. I believe control should be the mediator and too much alcohol is definitely not the way to contribute with the Hacker Community. I believe this too, has to change. Every time we as individuals try to differentiate between gifted, creative and collaborative people but get drunk in the process, we fail to do so.

I haven't gone to DefCon yet but I know some facts. First of all, Defcon has a lot more people (about 15,000-20,000 per year) and it has increasingly growing over the years. It is one of the most popular Hacker Conferences (along with BlackHat) in the world. Hackers and non-hackers attendees as well as speakers all around the world attend this conference.  You can have an idea of what it is by watching some Youtube videos but there is nothing like going and seeing for yourself. That is why I cannot write enough about this event. What I can say though, is that this event has always been hosted in the Strip of Las Vegas, NV where this year it will be the first time that they are going to have 2 venues because of the growth of interested people. One venue will be to do the talks and the other to do all the other activities such as Capture the Flag (CTF), labs, and other fun and collaborative projects. Being bigger than the other events, Defcon brings more innovation and ideas to the Hacker's community as well as opportunities to participate and have participants work and join open source projects. 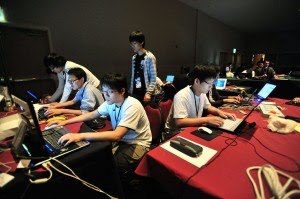 Not only talks and networking are being done on these events but also side activities. Challenges such as CTF (Capture the Flag), gunshooting or beer brewing contests. Those events haven't happened on Thotcon or BSides (or at least this year) but it does happen a lot in Defcon. There are also mazes and puzzles within the schedule of the event in which , if you solve them, you get awards; including free life pass for that event.  Be careful though, at DefCon, if you connect to their Wireless Internet connection, you will be hacked and put in the "Wall of Shame" just because is fun to do so.  Also, the atmosphere is great because of the great people, great music and positive learning vibe. Some of the music styles are brought back from the underground (or ex-underground) world such as: Dubstep, Techno, Drum & Bass, House and Raggae. These music styles do not represent the use of drugs of any sort but passion for "all things electronic", hence all of these styles fall under the category of Electronic Dance Music. Passion for all electronic things is the only antidote for attendees who want to share their experiences, projects, talks, opinions and even argue about today's hot subjects. It is the place where all the IT people (don't have to be a "hacker" in order to attend) really understand each other when they talk because they all know what they are talking about. Unlike the past where altruism was priority to boost knowledge and curiosity, nowadays it is not seen as much as that but more as a more organized, preplanned and structured way. Even though back then the Hacker Conferences were more like "technological rave" where there were a lot of DJs spinning their turntables and beers everywhere, now it is more like a sponsored planned security event.

Not only Hak4Kidz, but there are also more special events for your kids. It does not teach them how to become a criminal or how to break into computers or locks but the whole Hacker's mentality.  The hacker's mentality is not about doing damage or crime, but how to "think outside of the box". Activities such as solving puzzles, programming for kids and building their own artifacts are only a few of all the activities they are subjected to do and learn at their best capacity. It is also to make them think creatively and plan their future and be more aware about the world they're exposed to.

We must understand that complaining about how the scene used to be and flashing back to the past to have those chills will not help the situation in these present days. We need to be ourselves and if you liked what happened way in the back, why not doing your own event? It does not matter if it is small, medium or huge or where it could be (at your house, a secret warehouse or at the rooftop of an old building). What it really matters is the connection one gets and how rich the events are not only at the talks, but also doing workshops, helping people learn new concepts and stuff as well as participating doing projects and supporting them donating. For example, attending Thotcon opened a new opportunity not only to know my coworkers a little more but also to meet new people with the same ideas than me. Attending Besides was a great experience because not only I had a contact from someone to hook up in the future but also I've met really important people; someone close in working on a project which I strongly support.

Overall, going to Hacker Community events are about what you can bring to the table other than what to expect. Yes, they must accept feedback (maybe putting a feedback box for next year improvements?). But complaining of how it used to be will not change a thing, especially if you don't give out your feedback or host your own side activity. Get known, contact the right people for the event, get to work, get ideas, implement them and try them on your next year's HackerCon. After all, it is about sharing, learning and make contacts. Let's all make this possible. Hack on!!

Posted by UnsecurityNow at 11:27 AM No comments: